This section covers the effects of frequency on the behavior of the following selected models:

A resistor that appears to work in straightforward manner can change its behavior with respect to the Operating frequency in a DC circuit. Depending upon its value and frequency of an operation, a resistor can behave in a resistive, capacitive, or inductive manner. 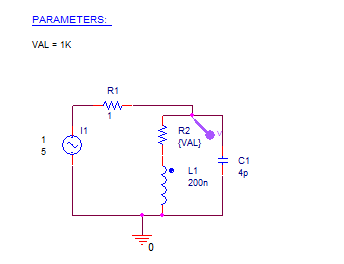 A small resistor does not exhibit much shunt capacitance, but its impedance increases with frequency due to the series inductance. In case of large resistors, the capacitance reduces the impedance as frequency increases, whereas the inductance is negligible.

Figure 2 shows a plot of impedance versus frequency for several resistor values. This plot clearly illustrates that a resistance value has a huge effect on resistor's behavior at higher frequencies.

Multilayer ceramic capacitors have much the same parasitic elements as a resistor, but are slightly rearranged. Figure 3 illustrates the behavior of a frequency-dependent model for a basic leaded ceramic capacitor, plotting impedance versus frequency for several typical part values. The equivalent series resistance (ESR) limits the Q of the capacitor; the parasitic inductance and capacitance value set the self-resonant frequency.

All capacitors self-resonate at some frequency, after which the impedance starts to climb inductively.

Resistors and capacitors are only part of the problem in making accurate PSpice simulations. Conductors (PCB traces and wires) and inductors also deviate from ideal as the frequency increases.

A conductor that looks like a small resistor at DC has an increasing impedance with a frequency that is dependent on the physical dimensions of the conductor. Its inductance can be approximated by an inductor of about 20 nH per inch of length in series with the DC resistance. Thus, a conductor looks inductive at frequencies as low as 10 kHz up to the length that is about a quarter-wavelength long. At longer lengths, the conductor undergoes multiple pole and zero resonances like an antenna. The frequency where a conductor stops looking inductive and starts to act like an antenna can be found using the formula,

where L is a quarter of the wavelength in inches, and F is in MHz. Thus, a conductor that is 10 inches long will behave like an antenna when the frequency is 285 MHz or greater. Most PCB traces are not long enough to act as antennas, but ribbon cables can be. On controlled impedance PCB's, the traces look like transmission lines.

Even power and ground planes used in a PCB design don't escape frequency effects. The impedance of a ground plane doesn't look inductive at higher frequencies; it looks lossy. At higher frequencies, the skin effect of the plane starts to dominate and increase the planes impedance. The skin effect is proportional to the square root of the frequency, so it doesn't rise as fast as does that of a wire that is behaving inductively.

Inductors vary greatly in shape and size depending on the exact job that they are to perform. Power inductors, like the type used in switching power supply output filters, are usually large structures that may self-resonate at frequencies from 500 kHz to 75 MHz. These power inductors are sometimes designed for low loss so they may have a large Q at resonance. The high Q gives rise to a rather narrow, sharp resonance. Above the resonance frequency, the inductor's shunt capacitance dominates. The shunt capacitance is usually large for a big power inductor because of the capacitive coupling among the many turns used. When modeling power inductors, the resonant frequency is based on the size of the core. Generally, the larger the core, the lower the self-resonant frequency.

Ferrite beads used for EMI control are at the other end of the spectrum. Beads are designed for lossy operation and have very low Q values with relatively low inductance. The self-resonance peak is low and very broad, extending for several octaves of frequency. Beads are best modeled as an inductor with a small shunt resistance on the order of 50 to 100 ohms and a low shunt capacitance of 1-5 pF or less.

Resistors are not the only components with temperature effects; most capacitors, especially ceramics, have very well-defined temperature curves depending on the dielectric used in their construction. However, a single-slope temperature curve is not sufficient for simulating the most common types of capacitors used in analog circuits. Therefore, both the linear and quadratic temperature coefficients must be specified in their PSpice .MODEL statements, such as,

Note: Resistors have an additional exponential temperature coefficient which can be used instead of the linear and quadratic coefficients.

In PSpice, the passive components can also be characterized for temperature effects that override the circuit's operational temperature and the temperature, TNOM, at which model parameters are assumed to have been measured. Individual device temperature behaviors can be customized by specifying either the T_ABS, T_REL_GLOBAL, or T_REL_LOCAL parameter in a .MODEL statement. A new measurement temperature can also be defined by setting the T_MEASURED model parameter.

You will simulate the circuit seen in Figure 4 to understand the temperature effects on passive components. 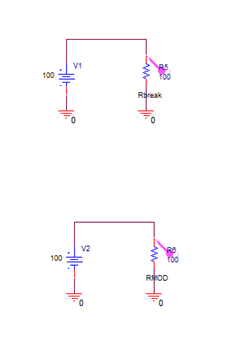 Suppose that a resistor's resistance multiplier is unity when measured at 0οC. To signify this, T_MEASURED can be specified in the resistor's corresponding .MODEL statement as

T_REL_GLOBAL is used to specify a device temperature that is relative to the circuit's operational temperature. For example, a power resistor might be dissipating power and be warmer than its surrounding global ambient by 10οC. This can be specified in a .MODEL statement as

For example, a model, RMOD, whose device temperature is 117οC greater than that specified in the RBASE model statement can be defined as

The PSpice simulation results of a circuit that has passive components with the .MODEL statements can be seen in Figure 5.