To use the symbols in magnetic.olb

The magnetic.olb library contains magnetic core models for commonly available nonlinear transformer cores. The core symbols have no pins; they are represented by the letter K enclosed in a box. For example, E13_6_6_3C81 part in magnetic.olb, represents an E core of size 13/6/6 and material grade 3C81. When using parts from magnetic.olb, you need to specify the coupling coefficient and the reference designator values of the inductors to be coupled. The inductor values are specified as number of turns. For example, top-left circuit in Figure 1, simulates a 20 turn inductor ( L3) on P42 pot core material grade 3C85. This core is represented by P42_29_3C85 part instance and model. The core model is represented by symbol instance K2.Generation of photocurrent 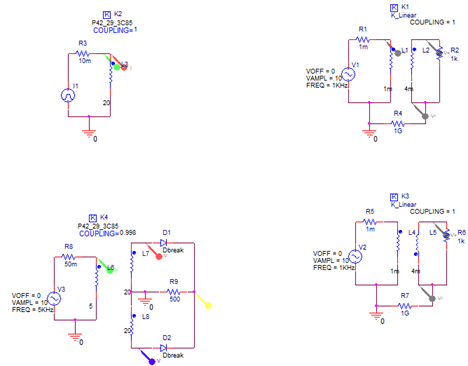 The circuit describes the relationship between inductance, voltage, and current, that is

The curves in Figure 2 shows that as di/dt changes, the voltage changes.

Besides the core library, magnetic.olb, you can also use the inductor coupling parts, Kbreak and K_linear, to represent transformer cores. The K_linear part from the analog.olb library, is used to represent a linear or an air core. When using K_linear part, you specify the coupling coffecient and the reference designator values of the tranformer windings (inductors) to be coupled. With K_linear cores, the inductances values of the tranformer windings must be specified in Henry (H). The Kbreak part from the breakout.olb library, is a generic symbol that can be used represent nonlinear cores. Kbreak has a pre-assigned model attribute, but its corresponding model in the breakout.lib library will not have a pre defined model parameters and it will simulate a core with default simulator model parameters. In this section, we will cover three example circuits that will help in understanding the usage of Kbreak and K_Linear symbols. These are the following:

Important: You will also notice that a 1G ohm resistance R4 is added in the circuit. This resistance is required in a simulation environment to provide reference and DC path to all nodes. In absence of this resistance, PSpice will give a floating point error. This high value resistance effectively keeps the secondary inductance floating and provides a DC path and a ground reference for the simulation.

In Figure 1, the bottom-left circuit is a Center-tapped Full Wave Rectifier. It is an example of various multi-winding transformers with desired coupling.

Referencing the CORE Model for Kbreak


To define your own CORE model parameters, do the following steps: