Learn something new with our collection of blog posts centered around various topics on PSpice® technology.

Grab A Coffee And Let Optimizer In PSpice Do The Work For You! (Part 2 of 4)

Anyone who designs complex circuits and claims they don’t use the Optimizer in their circuit design is most likely a super-genius with an IQ of 250.

"Infinite Monkey Theorem translates to the idea that any problem could be solved, with the input of sufficient resources and time". Optimization is just like having infinite monkeys at your disposal. Use it properly and you're The Man, abuse it and you're wasting time and resources.

In Part 1 of this blog series we analyzed our design using the Sensitivity Analysis. Once you get the results you’re looking for, you can apply the Optimizer tool to improve performance! Note that, the Optimizer works most efficiently when used on fewer components. And with the help of the Sensitivity analysis, we’ve got our components shortlisted. Thus, we are using Optimizer in this blog after Sensitivity analysis is performed on a circuit. A good circuit designer should make use of this powerful combination!

Let's look at the importance of Optimizing any circuit in order to meet your design goals.

In this blog, we will run the Optimizer tool on the same RF Amplifier circuit that we used in Part 1 of this series (see Figure 1 below) 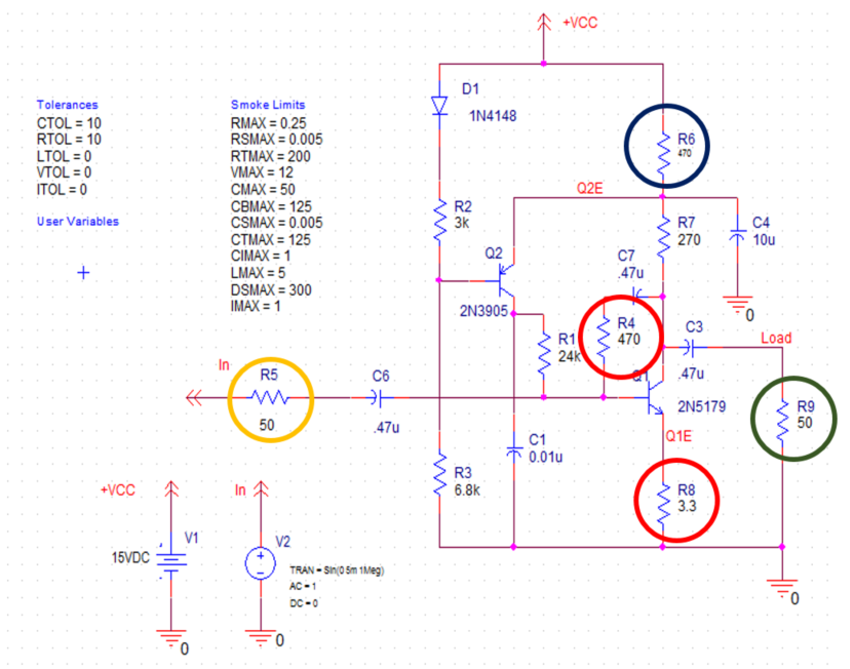 In Part 1 of the series, we identified components R5, R4, R8, R9 and R6 affect Bandwidth, Output Noise and Gain the most. So, it makes sense to just Optimize those components.

But note that, since R5 and R9 are used for Input and Output matching purposes, we will choose not to Optimize them. Rather we'll Optimize the following components: R4, R8 and R6.

Let's look at the steps you need to follow to perform Optimization in OrCAD Capture tool. These steps are the same as Sensitivity Analysis, so we do not need to redo them again. Run the Optimizer tool directly from the Advanced Analysis Environment.

There are 3 types Engines available in the Optimizer:

Optimization with Discrete Engine is generally performed at the end of the Optimization cycle. The output window environment will look like Figure 2 (below). 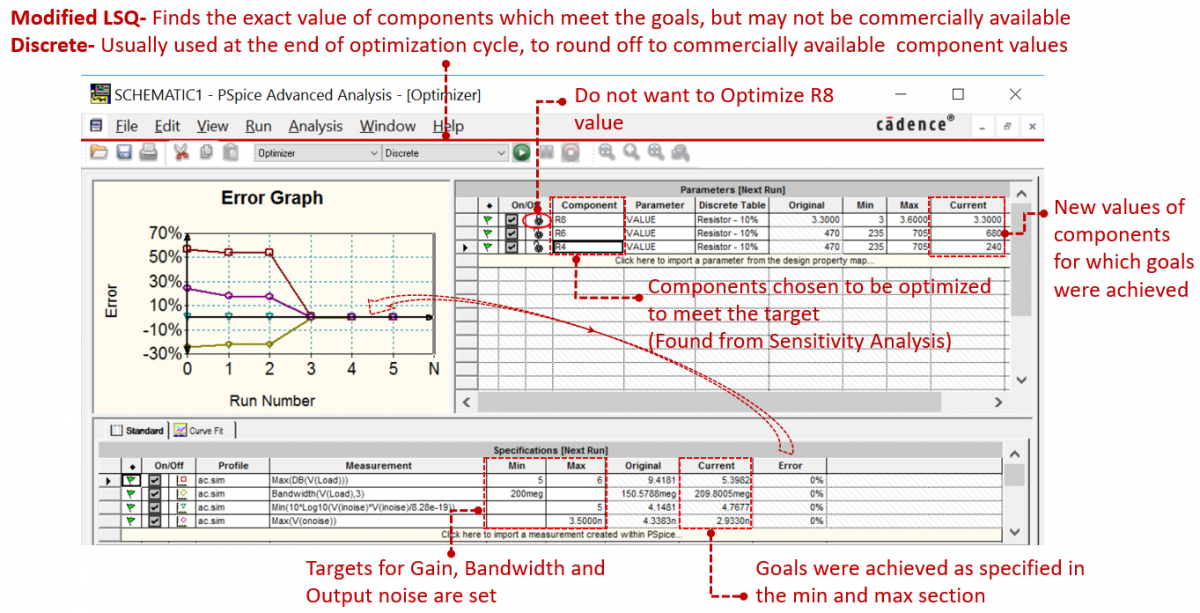 Figure 2: Output window of the Optimizer

In Figure 2 (above), note that the goals were set, and later met using the Optimizer tool with 0% error.

Now, let’s make the changes to the component values of R6 and R4 which helped us to meet our goals.

Now, let's recap what we did in Part 1 (Sensitivity Analysis) and Part 2 (this blog).

After achieving all the goals, you may think you are all set to fabricate the circuit. But, wait! What if your product gave you problems in the long run? You must have heard about so many recalls in the Automotive and Cellphone industry nowadays. You need to avoid those recalls to save your money! Consequences of product recalls on a company have been well articulated here

So, to make sure your product doesn't run into reliability issues in the future, utilize Smoke Analysis feature available within PSpice Advanced Analysis. In the upcoming Blog 3 of this series, we'll perform Smoke Analysis on the optimized version of the RF design. Stay tuned!

Try the OrCAD free version yourself and start applying these Advanced Analysis capabilities on one of the many demo designs available in there.

The intensifier is the nonexclusive term used to portray a circuit which creates an expanded form of its information signal. I need assignment help to complete my intensifier related task so please help me.

I really enjoyed reading this post, big fan. Keep up the good work andplease tell me when can you publish more articles or where can I read more on the subject?
pet

I should say only that its awesome! The blog is informational and always produce amazing things Drive Jacket

Yeah, its really important to optimize work process at any stage. When I worked at writing service for buying assignment cheap I used to improve my skills every day so students ordered a lot of assignments from me every day. I was the worker of the month for a couple of times.

I liked that actually it's

I liked that actually it's quite impressive I have always been looking for something like that a nice topic a unique idea or something that attracts me just like Jackets Junction always got excited whenever I visited.

Our team is motivated and

Our team is motivated and dedicated to providing you a seamless experience when it comes.
csgo smurf

CS GO is one of the most popular multiplayer games at the moment.

This is an amazing type of

Optimize It What could be

I should say only that its

I should say only that its awesome! The blog is informational and always produce amazing things ac repair santee
..  ac repair chula vista  ..  San Diego, CA

It What could be better than

It would be a big help if you

It would be a big help if you use it properly.

It's very interesting information and I want to read this carefully. Because of This type of tips, I can use them in my projects. Gustavo Woltmann

A great job is done by you. The information you shared here is useful and you had done lots of hard work. If someone is looking for the vaporizers then I can suggest you try Lookah Q7 e nail wax vaporizer. This vaporizer is unique in design having a water pipe with it.

As a concrete service provider Albany, NY, we really love the work that you've shared here. Keep it up!

I'll try this tool next time,

I'll try this tool next time, thanks! All the basic information about every celebrity is available now on the largest database of Celeb Networth where you can find all the information and net worth of a singer, actor, businessman...

Amazed to read this blog

I really amazed to read this blog post. It is so unique and informative. I found very meaningful knowledge through this blog and I must say that this blog really helps us to design a circuit using these tips. While I was reading this blog I feels that this blog is pretty much similar leather jacket mens article.

Another great topic and

Amazing post, thanks for sharing informative post Around the world a huge crowd wants to read this type of post I am also involved in this crowd and I am a fashion designer and also give discounts at

Superheros Jackets promo codes and after the job, my first choice is reading this type of post.

I really appreciate you

I really appreciate you sharing this valuable insights.

Optimization is just like having infinite monkeys at your disposal. Use it properly and you're The Man, abuse it and you're wasting time and resources. | Dumpster Rental  Irvine

Thank you for sharing

Etires.ae is the best tires shop in Dubai, Abu Dhabi, and the UAE. A premium Dubai tire shop, our vast collection includes Original Equipment tires from the leading manufacturers. Search through etires.ae tires online shop for all the top brands like Bridgestone, Dunlop, Continental, Goodyear, Pirelli, and Michelin. Take your pick from our diverse tires UAE selection, which gives the customers an option to buy mid-range as well as budget tires. continental tires Dubai

You know your projects stand out of the herd. There is something special about them. It seems to me all of them are really brilliant!

Very interesting blog. Alot of blogs I see these days don't really provide anything that I'm interested in, but I'm most definately interested in this one. Just thought that I would post and let you know.

Hello! I just wish to give an enormous thumbs up for the nice info you've got right here on this post. I will probably be coming back to your weblog for more soon!

There's no doubt i would fully rate it after i read what is the idea about this article. You did a nice job..

This is a great post. I like this topic.This site has lots of advantage.I found many interesting things from this site. It helps me in many ways.Thanks for posting this again.

Thanks for the best blog. it was very useful for me.keep sharing such ideas in the future as well.

Very interesting blog. Alot of blogs I see these days don't really provide anything that I'm interested in, but I'm most definately interested in this one. Just thought that I would post and let you know.

I recently found many useful information

Thanks for this great post, I find it very interesting and very well thought out and put together. I look forward to reading your work in the future.

Thank you for helping people get the information they need. Great stuff as usual. Keep up the great work!!!

I really appreciate this wonderful post that you have provided for us. I assure this would be beneficial for most of the people.

This is a smart blog. I mean it. You have so much knowledge about this issue, and so much passion. You also know how to make people rally behind it, obviously from the responses.

Thank you for helping people get the information they need. Great stuff as usual. Keep up the great work!!!

Thank you for the post. I will definitely comeback.

Very useful post. This is my first time i visit here. I found so many interesting stuff in your blog especially its discussion. Really its great article. Keep it up.

I truly adored reading your posting.

I want to say thanks to you. I have bookmark your site for future updates.

Thanks a lot for one’s intriguing write-up. It’s actually exceptional. Searching ahead for this sort of revisions.

I truly adored reading your posting.

The designing and testing of

The designing and testing of SMPS is cumbersome work and require lots of trial and error methods to get the right output.

A good circuit designer should make use of this powerful combination! -